Are You Listening? Festival 2013 - Review 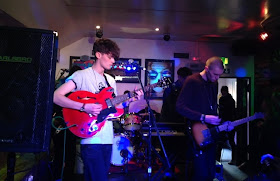 On Saturday 27th April the UK festival season kicked off properly with the inaugural Are You Listening? Festival in Reading, Berkshire. The polar opposite of the ‘other’ festival held at the end of August in the same town, AYL is an intimate multi-venue event featuring mainly local bands or artists having a connection to the area. At a price of just £10 for the whole day with all profits being donated to charity (Reading Mencap) it provided excellent value for those who can’t afford the exorbitant prices of the behemoth summer festivals.

Carrying on in a similar manner from last year’s festival coverage on Breaking More Waves here are 10 things we learnt about this new event:

Festivals often become victims of their own success. Bigger multi venue events can find punters spending nearly as much time in queues and having to plan rigorously ahead to avoid them. As a new kid on the block AYL suffered none of these problems, retaining the concept of how these events should work, with punters free to roam between the 7 venues with no at capacity issues. Yet getting a good balance of ticket sales versus capacity everywhere still felt busy enough to generate an atmosphere.

2.The stars were out in full for AYL.

We spotted Bono, Whitney Houston (back from the dead?) and Peter Andre during Bloom’s noodly indie set in The Purple Turtle. OK, they were on a TV screen showing videos to the side of the stage, but they were there in spirit, doing their bit for charity. Extra points to the birthday boy guitarist in Bloom who sported a rather fetching headband. Maybe he received it from his aunty for his birthday and had to reluctantly wear it to show his ‘appreciation’.

3.Reading appears to be in a drinks price time-warp

Was this 1998 again? £1.95 for a pint of cider in one venue. £2 for a pint of lager. We can’t imagine drinks being that price at the other Reading Festival.

If you fancied something more expensive to drink then the venue known as Milk was serving cocktails in glass milk bottles with a straw. We’re not sure if the other Reading Festival could compete with this either.

“Find us on Facebook and the internet.” It appears that the law is that every band in the country must say this during a performance. Come on bands, let’s have some more interesting banter or otherwise say nothing at all please. You think a lot about what and how you play - give some attention to the space between as well.

6.When it’s for charity nothing matters too much

Despite a few cancellations, including two of the bigger names on the bill (The Good Natured and Mt Wolf) nobody seemed to really mind. After all, it was all for charity, spirits were high and the organisers did a pretty decent job of communicating the cancellations (better than some larger well established festivals) and finding replacements to fill the slots.

7.Boys in the band indie rock dominated at AYL

As Elephants Are widescreen guitars were the metaphoric equivalent of a sonic air-raid, trying to find a bigger place, whilst Coastal Cities (pictured) off key yelps found a hooky charm when combined with synth subtlety and jittery hip-shaking guitars. In fact everywhere we looked there were men with guitars.

8.Tweeting about the weather at a festival is a risky business in the UK

“What a lovely sunny day at a festival.” Don’t ever tweet things like this. Two minutes later it will rain. (Thankfully it was only for a few minutes).

9.When there’s no danger of a queue at this type of event it’s fine to turn up just as an artist is about to start

Ex-My Luminaries man James Ewers’ new project is known as Lonesound and for a while it looked like the name couldn’t be more apt. Five minutes before he was due on stage the total size of the audience numbered two. Thankfully there was a last minute rush and Ewers demonstrated depth in lyrical delivery and his ability to pen a tune as he performed to a hushed appreciative crowd in the Reading International Solidarity Centre.

10.Despite all the male dominated indie rock at AYL, there were subtler softer delights to be discovered.

The gentle tones of Haze’s lounge pop provided a moment of respite against all the bluster. Imagine Nina from The Cardigans cooing at a keyboard and vocally you’d be getting close to the mark.

If AYL is to become a regular event or simply a one-off, we don’t know, but we can’t fault 2013's for starters. Value for money, raising cash for charity, highly enjoyable, with a relaxed unpretentious friendly atmosphere and some great music; Are You Listening? is a welcome new addition to the festival calendar.

Here's one of our discoveries from AYL. The lovely Haze.

Haze - In The Midst Of The Storm