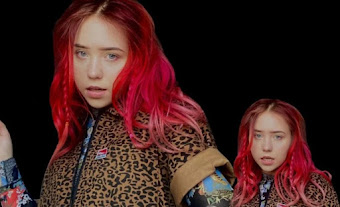 Today I’m introducing poutyface. Her real name is Olivia Knight and she's from California. She gained some early attention through Voisey – a platform allows users to record short videos using multi-tracked vocals over backing tracks uploaded by amateur and professional producers from around the world.

But it’s the two songs that she's released on more traditional streaming platforms that have grabbed me. (You can find one of them streaming on my New Music Weekly playlist on Spotify by clicking here.)

2020’s debut, Deathwish, reveals poutyface as having some fairly serious anger and triggering issues. Over a nursery rhyme like melody and minimalist backing track she sings: “Got a deathwish baby, push my buttons you’ll be pushin up daisies, pull up in a hearse no Mercedes, I might go Cruella de crazy you can’t even phase me.” Its delivery sounds a little like the missing link between Billie Eilish and Ashnikko, which is no bad thing. Deathwish is also the only pop tune I’ve ever heard that starts with a whispered utterance of the word “poopyface” as well as being super catchy.

Working itself around the classic quiet verse / noisy chorus formula, new single Never Fuckin Know sounds like something a rebellious cheerleading squad might rock out to. Starting with a spoken word intro not that dissimilar to Confidence Man’s C.O.O.L Party poutyface narrates a night out gone wrong: “So I made the mistake of going to a strangers party alone, and the last thing I remember is watching a Dominic Fike video, then I woke up, still drunk, sheets were clean but my clothes were fucked,” before the music ramps up with an insistent pop-punk verve and perhaps just a hint of Avril Lavigne. Expect to find yourself headbanging to this before the end. The two songs are very different in musical style, but their cartoonish spirit stands out.

Quotable lyrics, hooks and a big dose of bad-ass are all present and correct here; poutyface might just end up being your new favourite pop-star.

Email ThisBlogThis!Share to TwitterShare to FacebookShare to Pinterest
Labels: poutyface